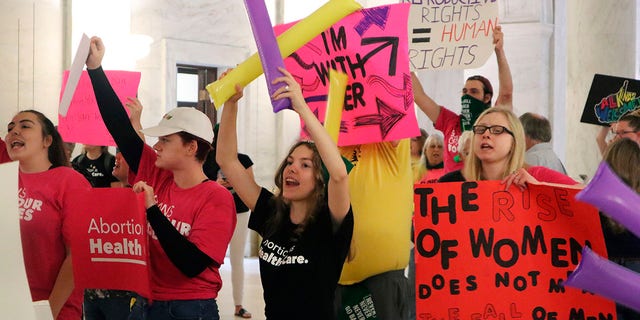 Gov. Jim Justice, a former Democrat who is now a Republican, said he always intended to approve a bill that would « protect life » in West Virginia.

Protestors rally outside the Senate chamber at the West Virginia state Capitol in Charleston, W.Va., as lawmakers debated a sweeping bill to ban abortion in the state with few exceptions.
(. (AP Photo/Leah Willingham))

« I said from the beginning that if WV legislators brought me a bill that protected life and included reasonable and logical exceptions I would sign it, and that’s what I did today, » he said in a statement on Twitter.

ABORTION REMAINS KEY ISSUE FOR SOME VOTERS AHEAD OF MIDTERMS

West Virginia became the second state to pass a near or total ban on abortion since the Supreme Court’s Dobbs decision earlier this summer overturned the landmark Roe v. Wade decision that had secured rights to abortions for 50 years. Several states had laws on the books outlawing the procedure that went into effect after the court’s decision, though there are legal battles preventing some of those laws from going into effect.

The state also has a staggered timeline for when restrictions go into effect. Pregnant, adult women cannot receive an abortion after eight weeks while pregnant children can receive one for one of the exceptions up until 14 weeks of pregnancy.

Both adults and children who want to receive an abortion must report the rape or incest accusations to law enforcement.

For abortions that are allowed, women must go to a hospital, rather than an abortion clinic. West Virginia has one clinic in the state, the Women’s Health Clinic.

Two Republican lawmakers have said the bill’s provision requiring abortions to be performed by a a physician at a hospital rather than an abortion clinic was meant to close the doors of the Women’s Health Clinic, according to the Associated Press.

The Women’s Health Clinic did not respond to a request for comment from Fox News Digital.

While the law will go into effect immediately, punishments for doctors who perform abortions will be on pause for 90 days, Justice said.

The Associated Press contributed to this report

Max Thornberry is an associate editor for Fox News Digital. You can reach him at Max.Thornberry@fox.com and on Twitter @Max_Thornberry